The first musical rehearsal – the moment of truth – who is prepared and how?
There are those who know all the notes and pay attention to pretty much everything else written in the score, those who are still unsure here and there, and then there are those who are just „WOW!“ prepared. Every phrase makes sense, even if they’re interpreting the piece for the first time…I’ve been „at home“ in the various categories over my 36 years on stage, but it was always a nice feeling when I belonged to the last category. We all signed in our contracts to go into the production perfectly prepared, but sometimes circumstances prevent this ideal state. That’s a shame because the first musical rehearsal is a freelancer’s calling card! And even in a permanent engagement, good preparation can’t hurt.

How do you get there?
The most important thing is to start as early as possible. As soon as you know you’re going to sing a role, start preparing.
Read the entire piano score first so you know what it’s all about, who the other characters are, and how your role relates to them. It is helpful to book a repetition lesson at the very beginning and go through the part once to know better what to expect.

Structure of the part
It is constructive to create a „road map“ through the piece, for example:

If there is an aria/ensemble where you are technically stuck, practise „backwards“, i.e. first the last page, then the last two pages, the last three etc., until you manage everything. The technically difficult parts should be taken to a singing teacher you trust.

Secondary literature
At the same time, read as much literature as possible about the composer, the librettist, their collaboration, the circumstances of the composition’s creation, read any letters, and so on.

But I have to confess: even the most brilliant secondary literature did not help me personally to „grasp“ the role in such a way that I could go into the first rehearsal with confidence.

Development of the role
Groundbreaking for me was when I first came up with the idea of writing a CV of the person I was to portray. I highly recommend this!
Answer questions like:

If only some things are clear from the libretto – invent the rest so that you have a complete picture of your character and he or she becomes tangible for you. If it turns out during rehearsals that the director sees certain things differently, you at least have a basis for discussion, or you can change your CV. 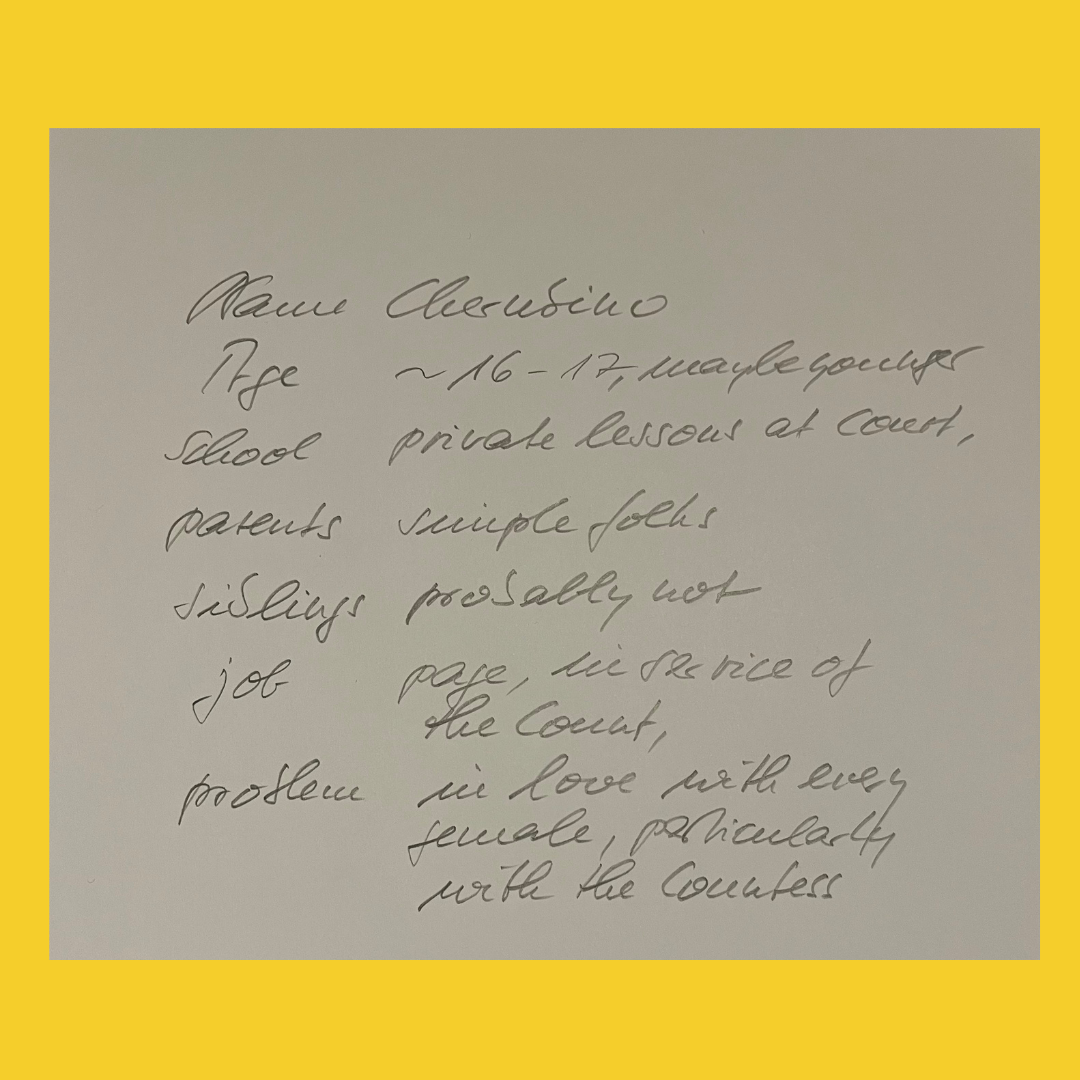 With the occupation of these questions, the preparation time becomes more entertaining, and before you know it, the role is in your head.

Musical preparation
As a clear rule, the best way to prepare is to strictly follow the composer’s instructions. Accurate learning saves stress during musical rehearsals. Take the role to a strict répétiteur and ask him/her to make sure that everything is correct:

If it’s a role in a language you don’t know, you can ask a native speaker to make you an audio file of the text and have it checked when you’re done learning.

Learning with Youtube?
It makes sense to listen to a good version of the role as interpreted by other colleagues at the beginning of the preparation to know how the orchestra sounds.
Then I recommend putting the recordings away for a long time and orientating yourself on the musical text so that your own interpretation can emerge. There is a lot of musical sloppiness on YouTube… To check whether you know the part by heart, working with a good recording can be helpful. Or ask a répétiteur to record the piano accompaniment of the part and memorize with this recording. If you play the piano well, you can make your own preparatory recordings…

Your piano score
After at most 3 productions with the same piece, hardly anything was recognisable in my piano reductions. Later, I disciplined myself and painted less. In the orchestra rehearsal phase, I started working with post-its:
When listening to the Stage-Orchestra-Rehearsals (be sure to do this!) I stuck small post-its in different colours into the piano score.
One colour each for
– rhythm
– intonation
– text
If it’s right in the following rehearsal, you can take the post-its away again and save the piano score a little.

All these are only suggestions, you surely have your own ideas / practices, the main thing is that you come to the first musical rehearsal top-prepared. Develop your own system – have fun!