We have all been there:

During the last two weeks before „the“ day, the important rehearsals accumulate:

This means you have 9-11 possibilities to lose your voice due to oversinging;)

When you have a small to medium–size role to sing, no problem, but as soon as you get the chance to sing more demanding parts, the question of „How will I ever make it to the premiere?“ will get more and more urgent.

By the way: Singing Mozart can be just as exhausting as singing Wagner or Verdi!

Let’s look at what makes us tired:

We, the singers, are responsible for finding the individual routine that makes us get to the premiere WITH a voice – nobody else can do this for us!

What can we do?

Things which might be helpful during this stressful time:

Develop an evening routine which fits you; some of these might help:

The next morning – another orchestra-rehearsal…

It happens quite often that the voice is „still fresh from last night“. If this is the case, be happy! Have a little warm-up before or after breakfast. Look forward to meeting your colleagues, also those from the orchestra and chorus. It’s early for them, too, friendliness will be highly appreciated.

you feel dog-tired and the last thing you want to do is to get out of bed and sing?

Where can we save and when should we sing out?

We meet the orchestra for the first time, just singing, no acting yet. And of course, we want to sing out on this.

STAGE-ORCHESTRA-REHEARSALS…the ones that risk to make you tired

These rehearsals are there to find the balance and the coordination between the orchestra and the stage. There are quite a few within a short period of time. Here is my suggestion:

Make a plan and decide which rehearsal you will sing out, and when you will mark all or part of the rehearsal. You might want to sing the two first ones, take it easy on Nr. 3 and sing the last two; you might always sing in the morning and mark at night, or the other way around…Whatever your strategy might be and as long as it is compatible with the working process: stick to it! 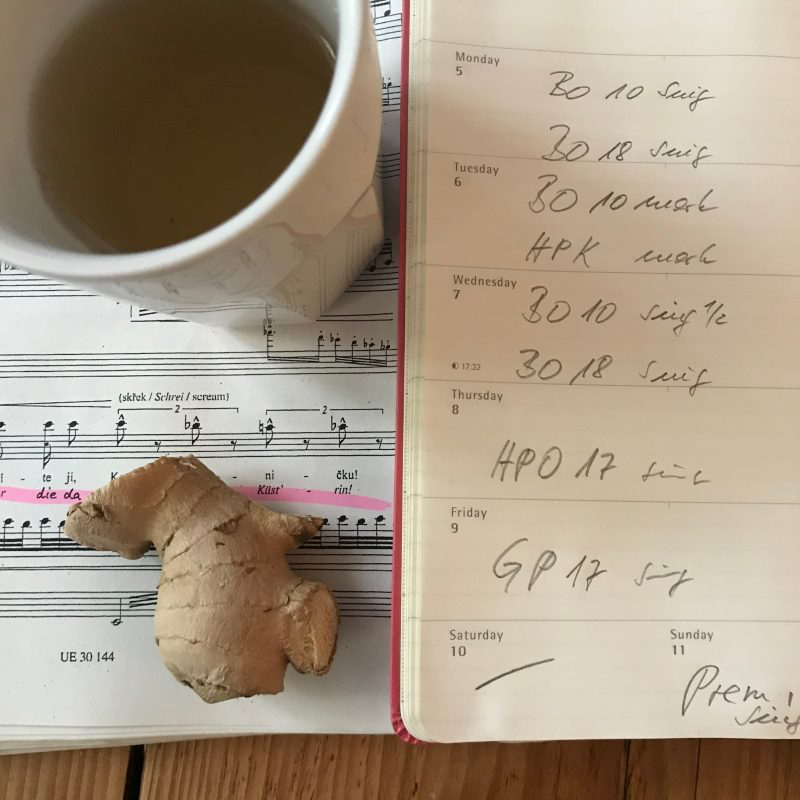 Marking or singing out? – The eternal question…

Singing out has advantages for:

What can you do to save your energy during stage-orchestra-rehearsals?

If you feel that you have no voice because your body is too tired, you might want to:

If you are sick:

Stay away from your colleagues! Coming into an orchestra-rehearsal with a virus is not heroic, but it means risking to pass your illness on to the next person!

…is a dangerous one, because it is so tempting: the light, the make-up, the costume, and back to the „comfortable“ accompaniment by the pianist can lead us to have too much fun and sing out as if we were performing. We should keep in mind that this rehearsal is the main rehearsal for the technical department, the lighting, the make-up, and costume-people. Singing part of it or marking (with a good energy) plus being on the right stage spot at the right time will do.

…is the first rehearsal to find out how the part fits you with orchestra when the PAUSE is where it actually should be. Of course, you would want to sing out, but don’t overdo it – safe some voice for the general and the premiere – you can mark some stressful spots.

…is, although officially labeled as rehearsal, in many houses already with a full audience and is the test-performance, so don’t mark it, unless you are singing Götterdämmerung-Brünnhilde with only one day off before the premiere.

…is/are to shut up and rest!

Hang in there – Premiere-nights are there to survive with decency, the fun is for later!

I HOPE THIS WAS HELPFUL – SEE YOU SOON AGAIN!